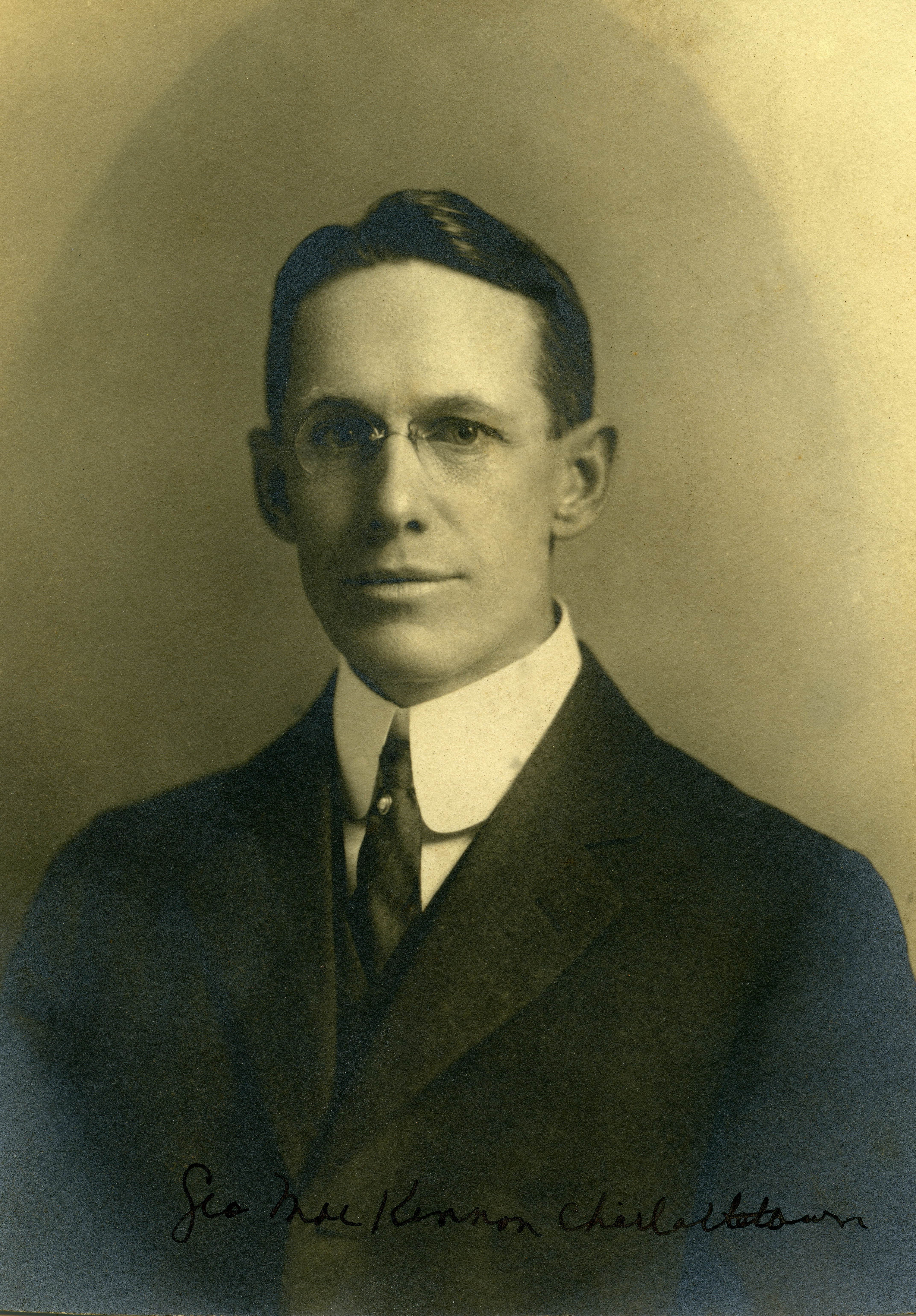 George Douglas MacKinnon born June 8, 1874 at Charlottetown, PEI and died January 24, 1936 at Sherbrooke, PQ. He is the son of Alexander MacKinnon (born Oct 31, 1842 at Hopewell, Pictou Co. and died at Charlottetown, P.E.I. on April 26, 1896) and Grace Ann Douglas (born January 2, 1844 at New Glasgow, and died Aug 6 1928.) From "The Eastern Chronicle" of 30 April 1896 Obituary: Alexander McKinnon, Esq., of the firm of McKinnon & McLean, Charlottetown, died on Sunday morning last. He had been unwell for about eighteen months; sometimes seriously ill; at other times able to go about. The end came suddenly. Mr. McKinnon was born near Hopewell, Oct. 31, 1842. He not only learned his trade, but worked in New Glasgow for a number of years as a machinist. In 1872, in company with Thomas A. McLean, another New Glasgow boy, Mr. McKinnon went to Charlottetown, and purchased the business of Messrs. Reardon & Patrick, iron founders. Under their management the business gradually extended, and was prosecuted with considerable success. Mr. McK., in 1867, was elected one of the three Water Commissioners for Charlottetown. In 1890 he was re-elected to the same office and served out the term of three years. "During the construction of the waterworks and putting them in operation," the Charlottetown Patriot says, "his sound judgment and skill in foundry business and machinery were very valuable to his colleagues." Mr. McK. was married to Grace Anne, d/o the late Alexander Douglas of this town, and sister of George A., Daniel, and Robert Douglas. She, with four sons and his mother, who lives at Westville, survive him. Charlottetown has lost one of its public spirited citizens, and St. James Presbyterian Church a worthy elder. Mr. McKinnon was in New Glasgow last summer, but was not looking very well at that time. On another page of this New Glasgow newspaper, was a brief death notice: Alexander McKinnon, s/o Lauchlan McKinnon, Dec. was formerly of Hopewell, and died at age 55 years. George founded the "MacKinnon Steel Co." of Sherbrooke, Quebec. The business was reportedly sold in 1929 for $500,000. He bestowed a building to the Y.M.C.A. in Sherbrooke in memory of his wife. He was elder in the Presbyterian Church up to the time of his death in 1936. His four daughters graduated from McGill. The following was part of an advertisment for share offerings in the MacKinnon Steel Company, published in the Montrael Gazette, December 14, 1928: The Company, which has been incorporated under the laws of the Dominion of Canada in 1928, has acquired as a going concern, the assets and undertakings of the MacKinnon Steel Company, Limited. The MacKinnon Steel Company, Limited, and its predecessor, MacKinnon, Holmes & Company, Limited, have been in suc cessful operation for the past nineteen years. Throughout most of this time during which it has been operated and controlled as a Family concern, a large proportion of the earnings have been used on improving and enlarging the plant. The plant consists of a modern structural steel plant situated in Sherbrooke, Quebec. The buildings are all steel frame with brick walls and the site which has connections with both the Canadian Pacific and Canadian National Railways, has an area of about six acres. The business of the Company has been chiefly the fabrication and erection of steel frames for buildings, steel bridges and plate work. The MacKinnon Steel Company has successfully carried out contracts for bridge and structural steel work for the Quebec Government, Canadian National Railways, Canadian Pacific Railway, Fraser Companies Limited, Brompton Pulp and Paper Company, Limited, Asbestos Corporation, Limited, Shawinigan Chemicals, Limited, and many others. The plant is capable of double its current output and provision has been made in the present financing to handle the increased production. The fabrication of tanks and various other plate products for which there is such a large demand at the present time will be added to the Company’s production. ASSETS: The Company has purchased the real estate, buildings, machinery, and contracts of the predecessor Company for a sum of $450,000. An appraisal made by the Canadian Appraisal Company, Limited, as of October 29th, 1928 values the real estate and replacement cost of the buildings, machinery and equipment at $469,044 and the depreciated value at $389,142. The Balance Sheet, certified by Messrs. Price, Waterhouse and Company, Chartered Accountants’, as of October 20th, 1928, after giving effect to the present financing shows net current assets of $227,247, making total net assets of $677,247. The current assets are over four times the current liabilities. EARNINGS: The net earnings of the MacKinnon Steel Company, Limited, as certified by Messrs. Price, Waterhouse and Company, Chartered Accountants, after giving effect to the present financing for the year ending July 31st, 1928, after provision for depreciation and income tax amounted to $90,798. As applied to MacKinnon Steel Corporation, Limited, this is over twice the Preferred dividend requirements; and after payment of Preferred dividends, $4.00 a share on the Common stock. For the period from August lst 1928 to October 20th 1928, the net earnings after depreciation and income tax have been at approximately the same rate as the last fiscal year. CONVERSION PRIVILEGE Holders of the, Preferred shares have the right, at their option, to convert each share of Preferred into two shares of no par value Common stock of the Company and the calling of such Preferred shares for redemption shall not extinguish their right of conversion until the expiration of the thirty days redemption notice. MANAGIMENT The management of MacKinnon Steel Corporation, Limited, will continue in the hands of those who have been associated with the successful operation of the predecessor company for many years. It is confidently expected that the new interests which have come into the business rn a substantial way will materially supplement operating conditions, and not only assure the Company a continuance of the current rate of production, but also the increased capacity which the plant is capable of handling.