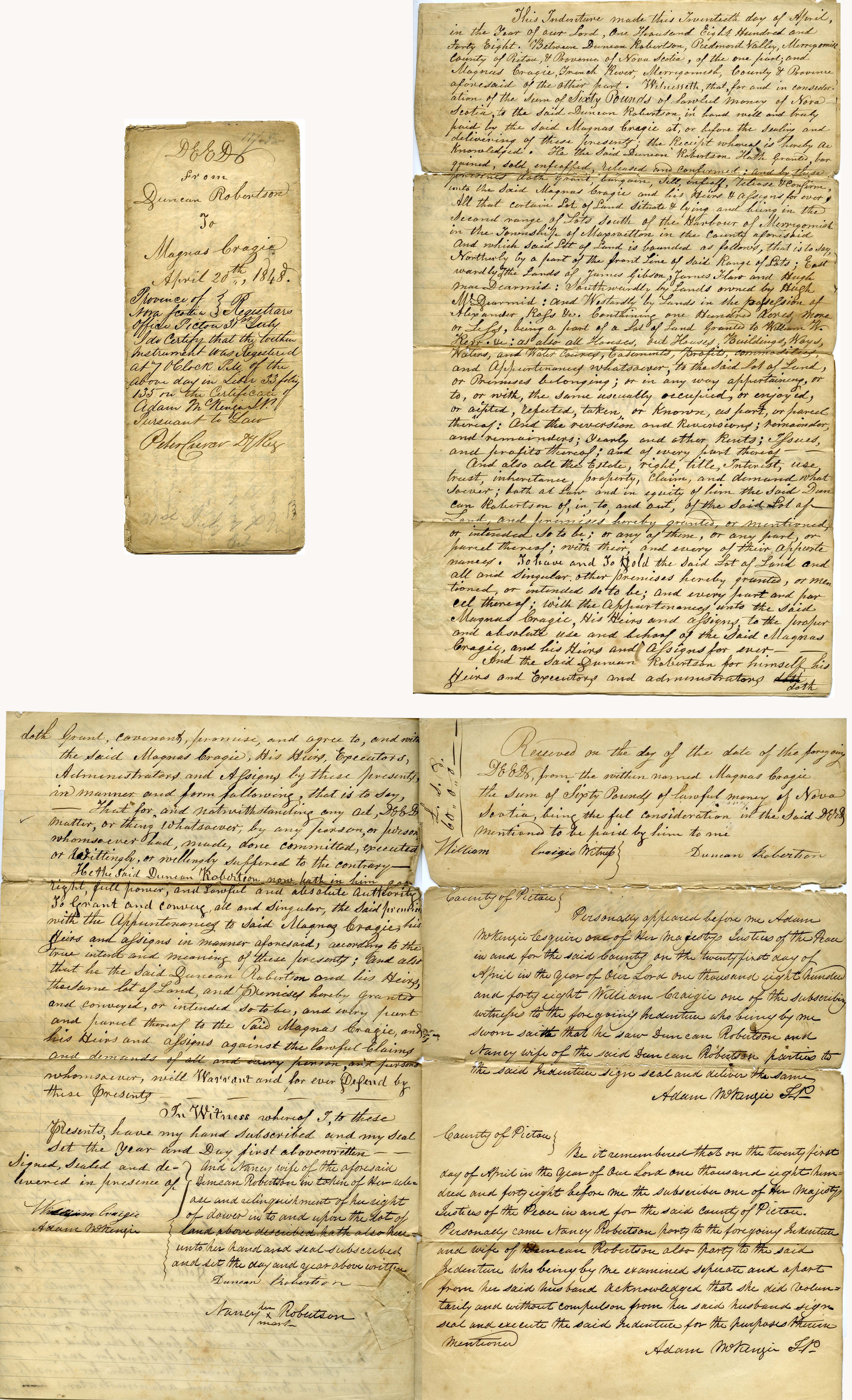 DEED from Duncan Robertson To Magnus Cragie April 20th, 1848. Province of Nova Scotia} Registrars Office Pictou 31st July.  I do Certify that the within Instrument was Registered at 7 o'clock P.M. of the above day in Liber 33 folio 135 on the Certificate of Adam McKenzie J.P. Pursuant to Law, Peter Crerar Dupty Registrar

This Indenture made this Twentieth day of April, in the Year of our Lord, One Thousand Eight Hundred and Forty Eight.  Between Duncan Robertson, Piedmont Valley, Merrigomish, County of Pictou, & Province of Nova Scotia, of the one part; and Magnus Gragie, French River, Merrigomish, County & Province of aforesaid of the other part. Witnesseth, that, for and in consideration of the sum of Sixty Pounds of Lawful money of Nova Scotia, to the said Duncan Robertson, in hand well and truly paid by the said Magnus Cragie at, or before the sealing and delivering of these presents; the Receipt whereof is hereby acknowledged.  He the said Duncan Robertson Hath Granted, bargained, sold, enfeoffed, released and confirmed; and by these persons both Grant, bargain, sell, eneoff, release & confirm, unto the said Magnus Cragie and his Heirs & assigns for ever, All the contain Lot of Land situate & lying and being in the Second range of Lots South of the Harbour of Merrigomish in the Township of Maxwelton in the County of aforesaid and which said Lot of Land is bounded as follows, that is to say, Northerly by a part of the front Line of said Range of Lots; Eastward by * the Lands of James Gibson, James Fla-- and Hugh MacDearmid: Southwardly by Lands owned by Hugh M'Dearmid: and Westardly by Lands in the possession of Alexander Ross, etc. Containing one Hundred Acres, more or Less, being a part of a Lot of Land Granted to William W. Kerr. etc.; as also all Houses, out Houses, Buildings, Ways, Waters, and Water courses, Easements, profits, commodities, and Appurtenances whatsoever, to the said Lot of Land, or Premises belonging; in or any way appertaining, or to, or with, the same usually occupied, or enjoyed, or accepted *, refuted, taken, or known, as part, or parcel thereof: And the reversion and Reversions; remainder, and remainders; yearly and other Rents; Issues, and profits thereof; and of every part thereof — —And also all the Estate, right, title, Interest, use, trust, inheretance, property, claim, and demand whatsoever; both at Law and in equity of him the said Duncan Robertson of, in, to, and out of the said Lot of Land, and premises hereby granted, or mentioned, or intended so to be; or any of these, or any part, or parcel thereof; with their, and every of their appurtenances.  To have and To Hold the said Lot of Land and all and singular other premises hereby granted, or mentioned, or intended so to be; and every part and parcel thereof; with the appurtenances unto the said Magnus Craigie, His Heirs and assigns, to the proper and absolute use and behalf of the Said Magnus Cragie, and his Heirgs and Assigns for ever — —

And the said Duncan Robertson for himself, his Heirs and Executors and administrators, doth

doth Grant, covenant, promise, and agree to, and with the said Magnus Cragie, His Heirs, Executors, Administrators and Assigns, by these presents, in manner and form following, this is to say, — That for, and notwithstanding any act, DEED, matter, or thing whatsoever, by any person, or persons, whomsoever had, made, done committed, executed or Wittingly, or willingly suspended * to the contrary —

The said Duncan Robertson now hath in him good right, full power, and Lawful and absolute Authority To Grant and Convey, all and singular, the said promise with Appuntenances to said Magnus Cragie, his Heirs and assigns in manner aforesaid, according to the true intent and meaning of these presents; and also that he the said Duncan Robertson and his Heirs, and assigns against the lawful Claims, and demands of all and every person, and persons whomsoever, will Warrant for ever Defend by these Presents ——

In Witness whereof I, to these Presents, have my hand subscribed and my seal set the Year and Day first abovewritten ——

Signed, Sealed and delivered in presence of William Craigie (signature) Adam M'Kenzie (signature)} And Nancy wife of the aforesaid Duncan Robertson in token of her release and relinquishment of her right of dower in to and upon the lot of land above described, hath also hereunto her hand and seal subscribed and set the day and year above written

Received on the day of the date of the foregoing DEED, from the within named Magnus Cragie the sum of Sixty Pounds of lawful money of Nova Scotia, being the ful consideration in the Said DEED mentioned to be paid by him to me

Be it remembered that on the twenty first day of April in the year of Our Lord one thousand eight hundred and forty eight before me the subscriber one of Her Majestys Justices of the Peace in and for the said county of Pictou.