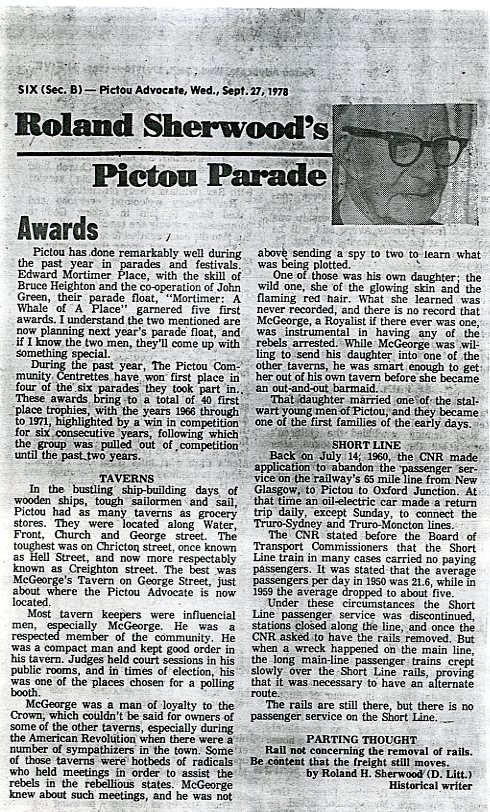 Pictou has done remarkably well during the past year in parades and festivals Edward Mortimer Place, with the skill of Bruce Heighton and the co-operation of John Green, their parade float, “Mortimer: A Whale of A Place” garnered five first awards. I understand the two mentioned are now planning next year’s parade float, and if I know the two men, they’ll come up with something special.

During the past year, The Pictou Community Centrettes have won first place in four of the six parades they took part in. These awards bring to a total of 40 first place trophies, with the years 1966 through 1971, highlighted by a win in competition for six consecutive years, following which the group was pulled out of competition until the past two years.

In the bustling ship-building days of wooden ships, tough sailormen and sail, Pictou had as many taverns as grocery stores. They were located along Water, Front, Church and George Street. The toughest was on Chricton Street, once known as Hell Street, and now more respectably know as Creighton Street. The best was McGeorge’s Tavern on George Street, just about where the Pictou Advocate is now located.

Most tavern keepers were influencial men, especially McGeorge. He was a respected member of the community. He was a compact man and kept good order in his tavern. Judges held court sessions in his public rooms, and in times of election, his was one of the places chosen for a polling booth.

McGeorge was a man of loyalty to the Crown, which couldn’t be said for owners of some of the other taverns, especially during the American Revolution when there were a number of sympathizers in the town. Some of those taverns were hotbeds of radicals who held meetings in order to assist the rebels in the rebellious states. McGeorge knew about such meetings, and he was not above sending a spy to two to learn what was being plotted.

One of those was his own daughter; the wile one, she of the glowing skin and the flaming red hair. What she learned was never recorded, and there is no record that McGeorge, a Royalist if there ever was one, was instrumental in having any of the rebels arrested. While McGeorge was willing to send his daughter into one of the other taverns, he was smart enough to get her out of his own tavern before she became an out-and-out barmaid.

That daughter married on of the stalwart young men of Pictou, and they became one of the first families of the early days.

Back on July 14, 1960, the CNR made application to abandon the passenger service on the railway’s 65 mile line from New Glasgow, to Pictou to Oxford Junction. At that time an oil electric car made a return trip daily, except Sunday, to connect to Truro-Sydney and Truro-Moncton lines.

The CNR stated before the Board of Transport Commissioners that the Short Line train in many cases carried no paying passengers. It was stated that the average passengers per day in 1950 was 21.6, while in 1959 the average dropped to about five.

Under these circumstances the Short Line passenger service was discontinued, stations closed along the line, and once the CNR asked to have the rails removed. But when a wreck happened on the main line, the long main-line passenger trains crept slowly over the Short Line rails, proving that it was necessary to have an alternate route.

The rails are still there, but there is no passenger service on the Short Line.

Rail not concerning the removal of rails. Be content that the freight still moves.