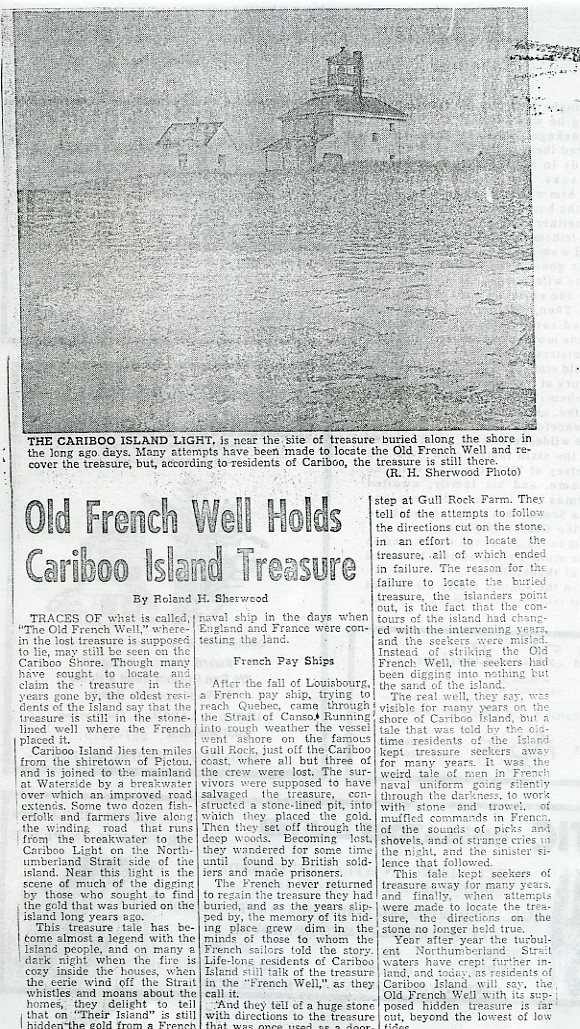 The Cariboo Island Light, is near the site of treasure buried along the shore in the long ago days. Many attemps have been made to locate the Old french Well and recover the treasure,but, according to residents of Cariboo, the treasure is still there.

Traces of what is called, "the Old french Well" wherein the lost treasure is supposed to lie, may still be seen on the Cariboo Shore. Though many have sought to locate and claim the treasure in the years gone by , the oldest residents of the Island say that the treasure os still in the stone-lined well the french placed it.
Cariboo Island Lies ten miles from the shiretown of Pictou , and is joined to the mainland at Waterside by a breakwater over which an improved road extents. Some two dozen fisherfolk and farmers live along the winding road that runs from the breakwater to the cariboo Light on the northumberland strait side of the island. Near this light is the scene of much of the digging by thise who sought to find the gold that was buried on the island long years ago .

This treasure tale has become almost a legend with the island people , and on many a dark night when the fire is cozy inside the houses, when the homes, they delight to tell that on " their Island" is still hidden the gold from a french naval ship in the days when england and france were contesting the land.
French Pay Ships

After the fall of Louisbourg, a French pay ship , trying to reach Quebec, came through the strait of canso. Running into rough weather the vessel went ashore on the famous Gull rock, just off the Cariboo coast , where all but three of the crew were lost. The Survivors were supposed to have salvaged the treasure , constructed a stone-lined pit , into which they placed the gold. Then they set off through the deep woods. Becoming lost, they wandered for some timeuntil found by British soldiers and made prisoners.
the French never returned to regain the treasure they had burried, and as the years slipped by , the momory of its hidding place gew dim in the French sailors tols the story. Life-long residents of Cariboo Island still talk of the treasure in the "French Well," as they call it.

And they rell of a huge stone with directions to the treasure that was once used as a door step at Gull rock Farm. They tell of the attempts to follow the directions cut on the stone, in an effort to locate the treasure , all of which ended in failure. the reason for the failure to locate the buried treasure , the islanders point out , is the fact that the contours of the island had changed with the intervening years, and the seekers were misled. Instead of striking the old french well , the seekers had been digging into nothing but sand of the island.

The real well , they say, was visible for many years on the shore of cariboo Island, but a tale that was told by the oldtime residents of the island kept treasure eekers away for many years. It was the weird tale of men in French naval uniform going silently throught the darkness to work with stone and trowel, of muffled commands in French of the sounds of picks and shovels and of stange cries in the night , and the sinister silence that followed.

This tale ket seekers of treasure away for many years , and finally, when appemts were made to locate the treasure , the directions on the stone no longer held true.
Year after year the turbulent Nortumberland Strait waters have crept further inland , and today , as residents of Cariboo Island will say , the Old french WEll with its supposed hidden treasure is far out, beyond the lowest of low tides.