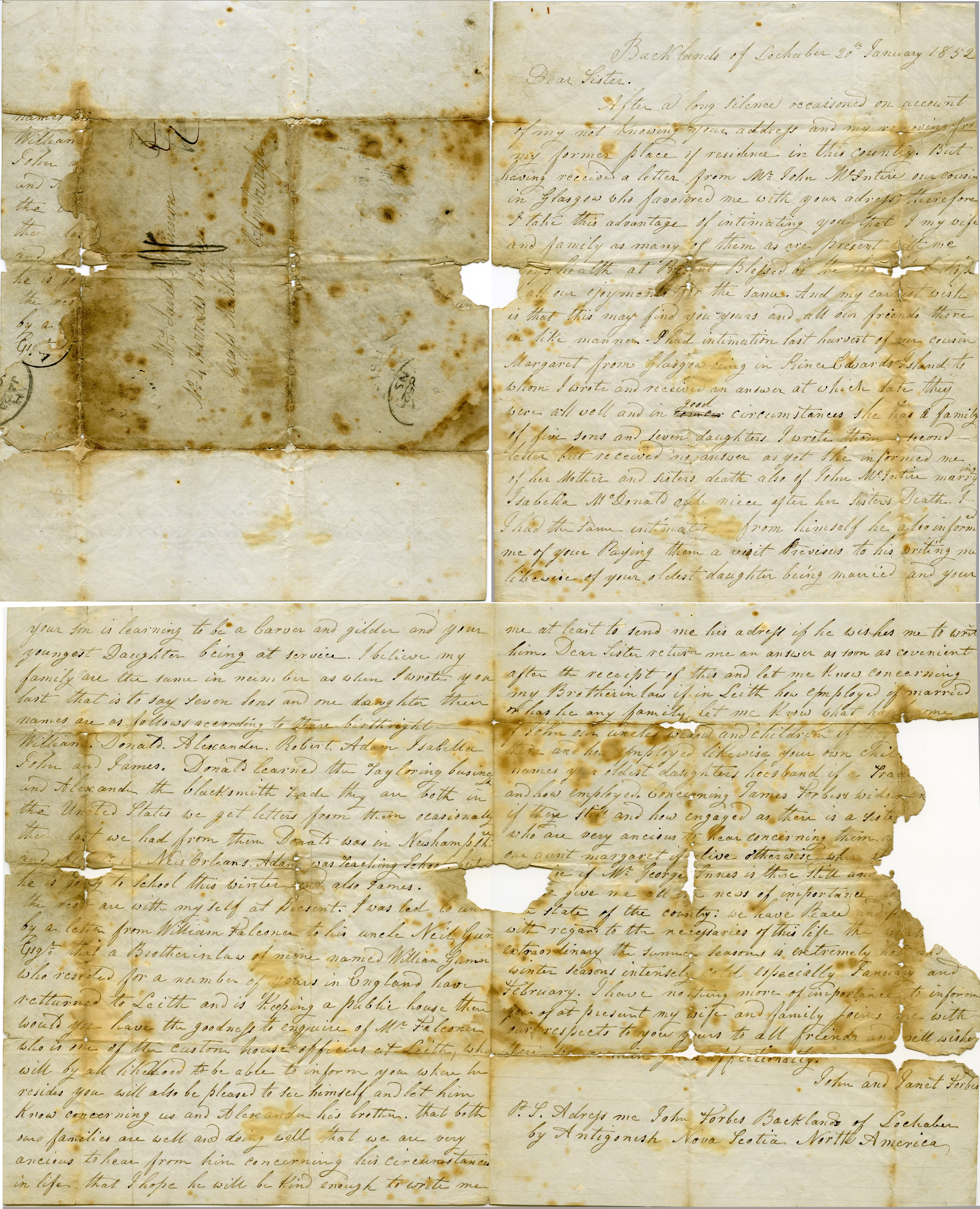 After a long silence occaisoned on account of my not knowing your address and my removing from my former place of residence in this country.  But having received a letter from Mr. John McIntire our cousin in Glasgow who favoured me with your address, therefore I take this advantage of intimating you that I, my wife and family as many of them as are present with me enjoys health at present with me --joys health at Present Blessed be the --- --- disposer --- all our ejoyments for the same.  And my earnest wish is that this may find you yours and all your friends there in like manner.  I had intimation last harvest of our cousin Margaret from Glasgow being in Prince Edwards Island to whom I wrote and received an answer at which date they were all well and in good circumstances she has a family of five sons and seven daughters  I wrote them a second letter but received no answer as yet  She informed me of her Mother and sisters death also of John McIntire marrying Isabella McDonald a-- niece after her sisters death. & I had the same intimation from himself he also inform me of your paying them a visit previous to his writing me likewise of yor oldest daughter being married and your son is learning to be a carver and gilder and your youngest daughter being at service.  I believe my family are the same in number as I wrote you last.  That is to say seven sons and one daughter there names are as follows according to there birthwright ~ William. Donald. Alexander. Robert. Adam. Isabella John and James.  Donald learned the tayloring business and Alexander the blacksmith trade  they are both in the United States we get letters from them ocasionally the last we had from them Donald was in Newhampshire and Alexander in New Orleans  Adam was teaching school but he is going to school this winter and also James.  the rest are with myself at present.  I was led to un--- by a letter from William Falconer to his uncle Neil Gunn, Esq. that a brother in law of mine named William Gunn who resided for a number of years in England have returned to Leith and is keeping a public house there would you have the goodness to enquire of Mr. Falconer who is one of the custom house officers at Leith, who will by all likelihood be able to inform you where he resides you will also be pleased to see himself and let him know concerning us and Alexander his brother.  that both our families are well and doing well that we are very anxious to hear from him concerning his circumstances in life that I hope he will be kind enough to write me at least to send me his adress if he wishes me to write him.  Dear Sister return me an answer as soon as convenient after the receipt of this and let me know concerning my Brother in law if in Leith how employed if married or has he any family, let me know what has become of John our uncles widow and children in they --- there and how employed likewise your own children --- names your oldest daughters husband if a trade --- and how employed.  Concerning James Forbes's widow and --- if there still and how engaged as there is a sister --- who are very anxious to hear concerning  them.  --- our aunt margaret if alive otherwise who --- --- if Mr. George Innes is there still and --- --- give me all the news of importance ---  --- state of the country.  we have Peace and p-- with regard to the necessaries of this life the weat-- extraordinary the summer seasons is extremely hot and --- winter seasons intensely cold especially January and February.  I have nothing more of importance to inform you of at present my wife and family joins me with our respects to you yours to all friends and well wishers there --- remain your affectionally.