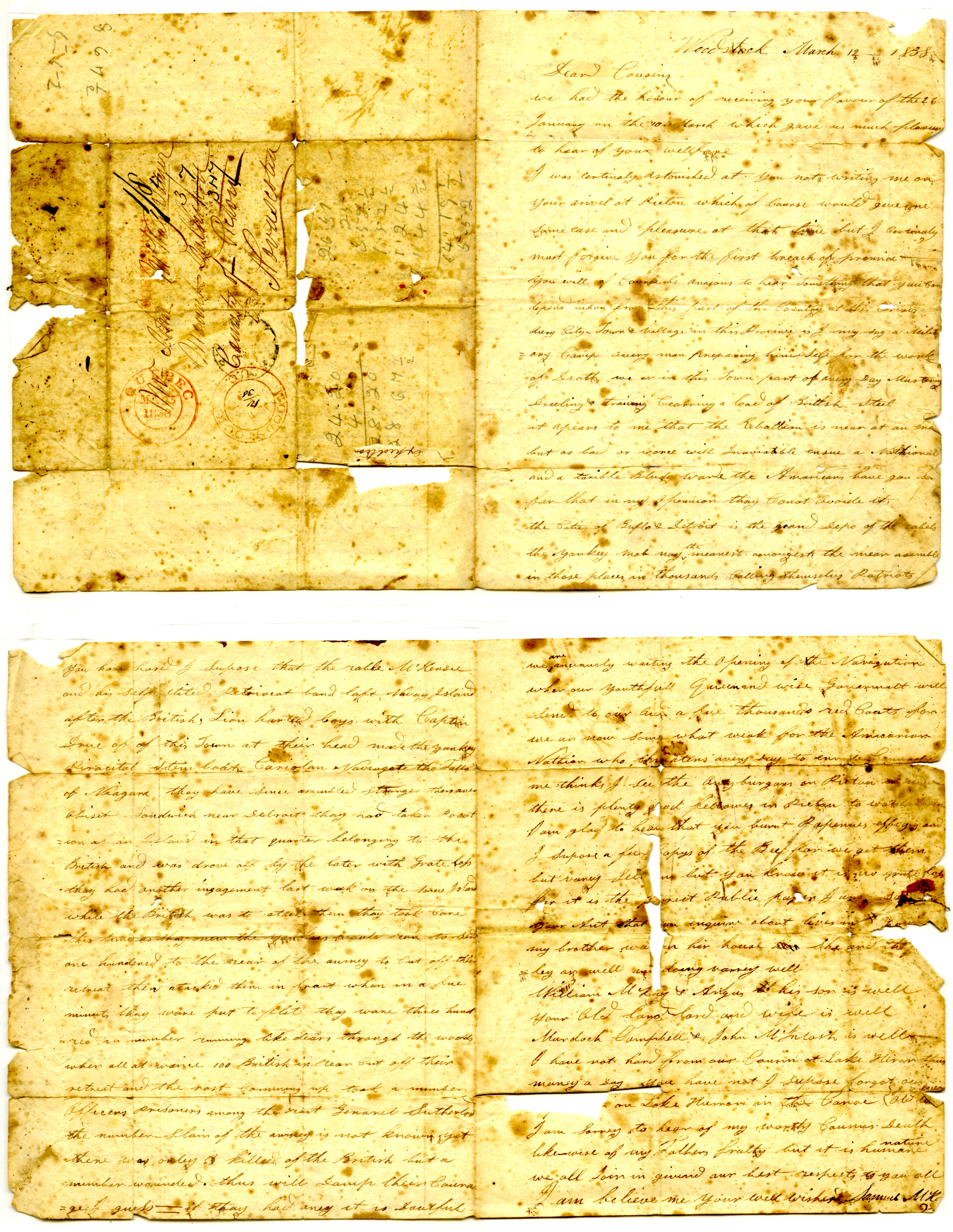 Description Letter from Woodstock, ON to Mount Dalhousie, NS, 1838

We had the honour of receiving your favour of the 26 January on the 10 March which gave us much pleasure to hear of your welfare.

I was certainly astonished at your not writing me on your arrival at Pictou which of course would give me some ease and pleasure at that time but I certainly must forgive you for the first breach of promise.   You will of course be anxious to hear something that you can depend upon from this part of the country at this crisis.  Every city, town & village in this province is if I may say a military camp.  Every man preparing himself for the work of death. We are in this town part of every day mustering, drilling & training carrying a load of British steel.  It appears to me that the rebellion is near at an end, but as bad or worse will inevitable ensue a national and terrible bloody war.  The Americans have gone so far that in my opinion they can not avoid it.  The cities of Buffalo & Detriot is the grand depo of the rebels.  The yankee mob nay the meanest amongst the mean assemble in those places in thousands calling themselves Patriots.

You have heard I suppose that the rebel M'Kenzie and his self (styled) (patriocat) band left Navy Island after the British.  Lion hunted boys with Captain Drew of this town at their head made the yankee piratical steamboat Caroline navigate the falls of Niagara. They have since assembled stronger than ever (opposite) Sandwich near Detroit.  They had taken possession of an island in that quarter belonging to the British and was drove off by the later with great loss.  They had another engagement last week on the same island. While the British was to attack them they took (care) this time as they new the yankees would run to send one hundred to the rear of the army to cut off their retreat then attack them in front when in a few minutes they were put to flight.  They were thence hundred in number running like dear through the woods when all at once 100 British in rear cut off their retreat and the rest coming up took a number Officers prisoners among the rest General Sutherland.  The number slain of the army is not known yet.  There was only (3) killed of the British but a number wounded.  This will dampen their courage I guess - if they had any it was doubtful.

We are anxiously waiting the opening of the navigation when our youthful Queen and wise government will send to our aid a five thousand red coats.  For we are now some what weak for the American nation who threatens everyday to envade Canada.  Me thinks I see the Anti-burgers in Picton now.  There is plenty of fellows in Picton to watch them.  I am glad to hear that you burnt Papineaus effigy and I suppose a few copies of the Bee for we get them but very seldom but you know it is no great loss for it is the (poorest) public paper I ever (s--) your Aunt that (---) enquire about lives in (York) my brother was in her house.  She and the family are well and doing very well.

William McKay & Angus his son is well.  Your old land lord and wife is well.  Murdock Campbell & John McIntosh is well.  I have not heard from our cousin at Lake (Huron) this many a day.  You have not I suppose forgot our expedition on Lake (Human)(Huron) in the canoe {for ever old times.  I am sorry to hear of my worthy cousins death likewise of my Fathers frailty but it is human nature.  We all join in giveing our best respects to you all.  I am believe me your well wisher, Samuel McKay