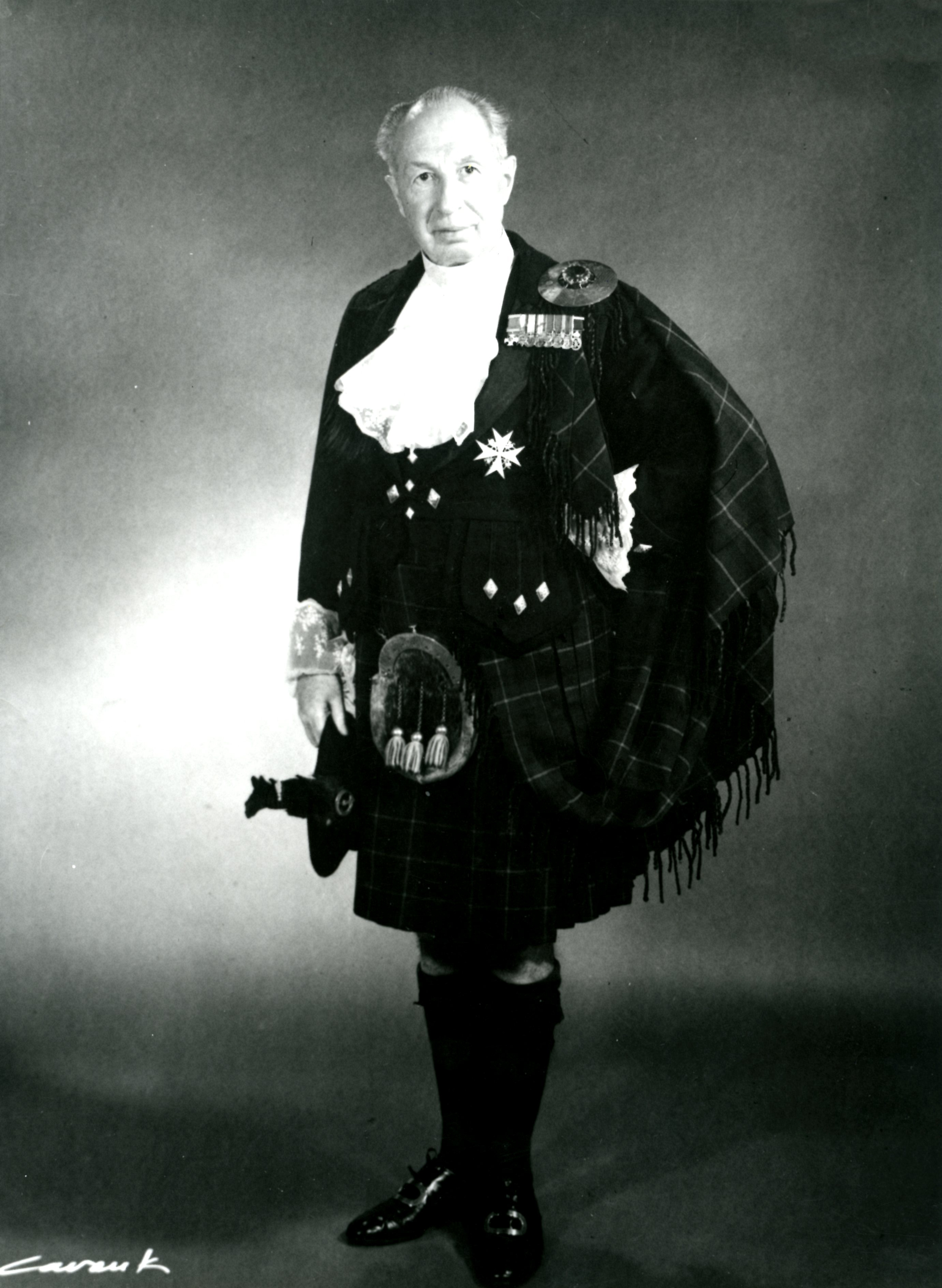 LT. COL. JOHN KEILLER MACKAY - Janet MacKay I think one should in the first place make a success in his own vocation. He should strive to be a lover of beauty, which is its own reward. He should be of service to others, which is one of the noblest attributes of mankind. He should value truth, without which no nation can become great and no society long endure. That is my submission. Thus Hugh Griggs summed up the philosophy of the Hon. John Keiller MacKay, D.S.O., V.D., Q.C., LL.D., D.C.L., following "a most enlightening interview" with him at his home in Etobicoke. Mr. Griggs went on to say, "Many, many pearls of wisdom come from the fertile mind of this great Canadian, who has a deep concept of what life should mean to the average man - in fact to all men". "Many new things are useful, but the experience of the ages must not be repudiated. Tradition has its failures but is it not so that tradition is the sum of those enduring values, which have been kept alive through all mutations and help to give us continual stability and direction to life?" Hon. Keiller MacKay asked. John Keiller MacKay, brother of A. Murray MacKay was born on 11 July 1888 in Plainfield, Pictou County, Nova Scotia, the son of John Duncan and Bessie (Murray) MacKay. After graduating from Pictou Academy, and from the Royal Military College in Kingston, Ontario (1909), he earned his B.A. (1912) at St. Francis Xavier University in Antigonish. Following World War I, he graduated from Dalhousie University with a LL.B. (1922). He set aside his education during World War I to serve Canada overseas. In 1916 he was awarded the Distinguished Service Order (DSO) for "conspicious gallantry in action" at the Somme. He was seriously wounded at Arras, in May 1918. His concern not only for his own struggle for rehabilitation, but that of all returned men, led to his appointment as the first National Vice-Chairman of the Canadian Legion when it was formed in Winnipeg in 1926. He drafted its constitution and incorporated it in both federal and provincial jurisdictions. He later became President of the Ontario Command, then Grand President for Ontario, and Honorary Life Member for Canada. His office in the Legion is the highest honour its membership can bestow. After graduating from Dalhousie University with his LL.B. in 1922, Keiller MacKay read law with the Hon. E. M. MacDonald in Pictou. He was called to the Bar of Nova Scotia in 1922 and in Ontario in 1923. He became a senior partner in the firm, "MacKay, Matheson & Martin" in Toronto and was appointed a King's Counsel in 1933. In 1935 he received an appointment as Justice of the Supreme Court of Ontario and, in 1950, of the Court of Appeal. In paying tribute to Keiller MacKay, the newsletter of the Royal Canadian Military Institute (July 1970) noted: "As a judge, he had infinite patience, infinite courtesy, and as well as having a sound knowledge of the law, he was paramount in using common sense, which is not always the same thing as the law." His judgements in the Court of Appeal "became well known to lawyers as accurate, legal documents, flavoured with the milk of human kindess that was inherent in the man". On 29 November 1957, at the age of 69, J. Keiller MacKay was appointed Lieutenant- Governor of Ontario. He retired on 1 May 1963. Again, as first citizen of Ontario, this Pictou County native never lost sight of the person. He walked as a peer among famous men, yet the ordinary man found him a sincere and true friend. Among the memorials to Hon. J. Keiller MacKay is the beautiful "Keiller MacKay Park" at North Bay, Ontario with its stately 52 homes for senior citizens. In Nova Scotia, a "Keiller MacKay Room" in the Bloomfield Centre of St. Francis Xavier University was opened by his widow, the former Katherine ('Kay') MacLeod in July 1973. Mrs. MacKay also presented a life-size portrait of Keiller MacKay in full Highland dress. "This would have warmed my late husband's Highland heart", she told all present. At the closing of the ceremonies, Major C. I. N. MacLeod, the university's piper, played a special musical tribute composed for the late Mr. MacKay, Keiller MacKay took great pride in his MacKay ancestry and Highland heritage. He was life member of the Clan MacKay Society (in Scotland), and served as Honorary Chieftain of the Clan MacKay Society of New Scotland. He was Honorary Chieftain of the Toronto Highland Gathering, and Honorary Patron of the Gaelic Society of Toronto, as well as Past President and life member of the St. Andrew's Society and member of the Celtic Historical Society. He was a frequent speaker on Scottish History and related subjects. He never forgot his Nova Scotia roots, and was a frequent visitor among his kith and kin in Pictou and North Colchester Counties. He participated in local Scottish gatherings each year, proudly wearing his Ancient MacKay kilt. The Gaelic Mod in St. Ann's, Cape Breton, and the Highland Games in Antigonish were particular favourites of his. Keiller MacKay was a "student" of Robbie Burns, and had a complete set of his works in his library. He was also a "Shakespearean scholar of considerable erudition". In 1956 he addressed members of the Dalhousie University Alumni on "Shakespeare and the Law". Never limiting himself to the realm of the mortal world, J. Keiller MacKay later spoke to the Shakespearean Society in Toronto on "Shakespeare and the Bible". It is fitting for us MacKays, who revered and loved him, to say our adieu to him in Horatio's words in Hamlet: Now cracks a noble heart. Good night, sweet prince; And flights of angels sing thee to thy rest! Copyright (C) 1993; Janet MacKay, B.R.E., B.Sc. Published in: "The MacKay Times of New Scotland": Spring 1993